We got the ferry from Portsmouth, UK down to Santander, Spain. The plan was to ride straight to Barcelona from there, have a couple of days looking around the city then head into the Pyrenees for a few days riding around the mountains then ride home straight up France to get the Euro tunnel in Calais then back home to North East England.

We knew it was going to be a long ride to Barcelona and the ferry arrived into Santander late meaning we wouldn’t be making it to the campsite until night. We went straight onto the main roads to get there faster not expecting the tolls to be so expensive, the first one was 23 Euros each and there was quite a few more after that but not as expensive as far as I can remember

We finally arrived at Camping El Masnou at 11pm, put the tents up in darkness, sorted our stuff out and were in our tents and asleep about 30 minutes later. The grass was absolutely solid making it nearly impossible to get the pegs into the ground so just had to hope the tents would stay up until the next day. 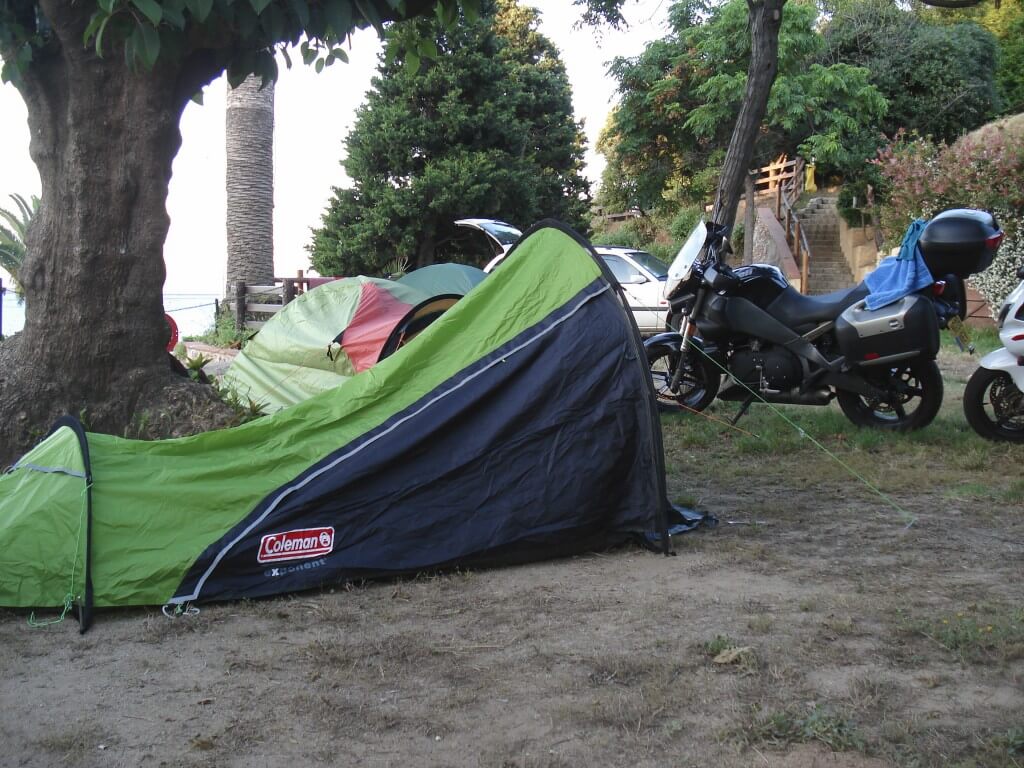 After a couple of days seeing the sites, drinking San Miguel and buying a little hammer from a boat shop for the tent pegs it was time to head off into the Pyrenees. Next destination, Sort 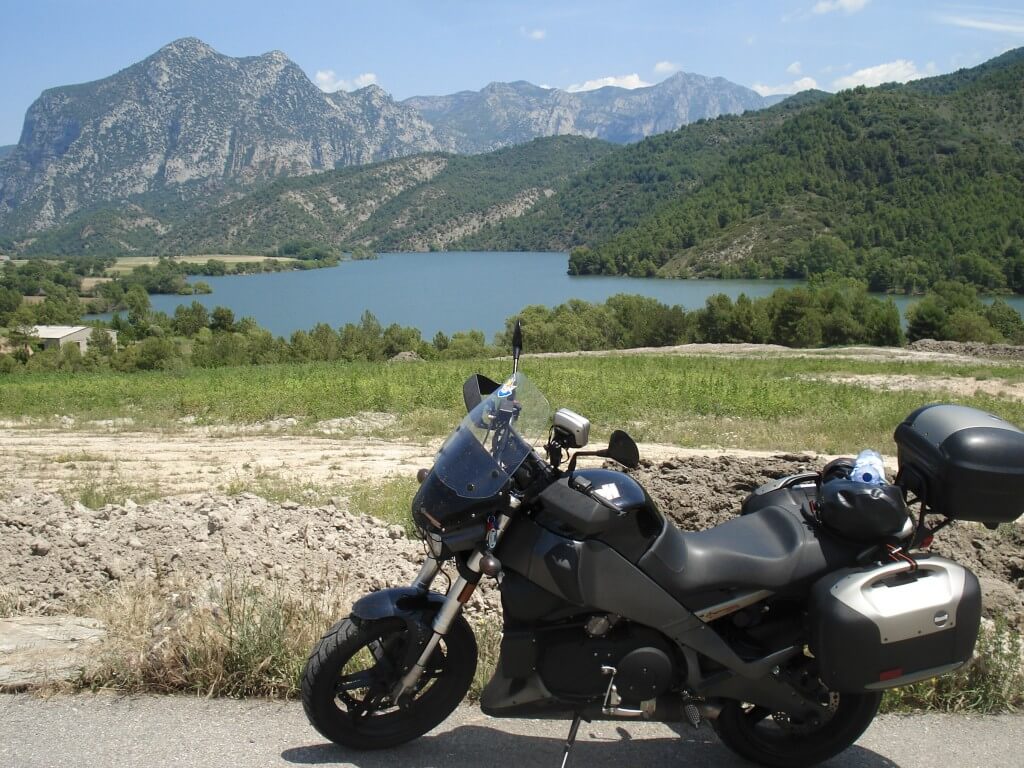 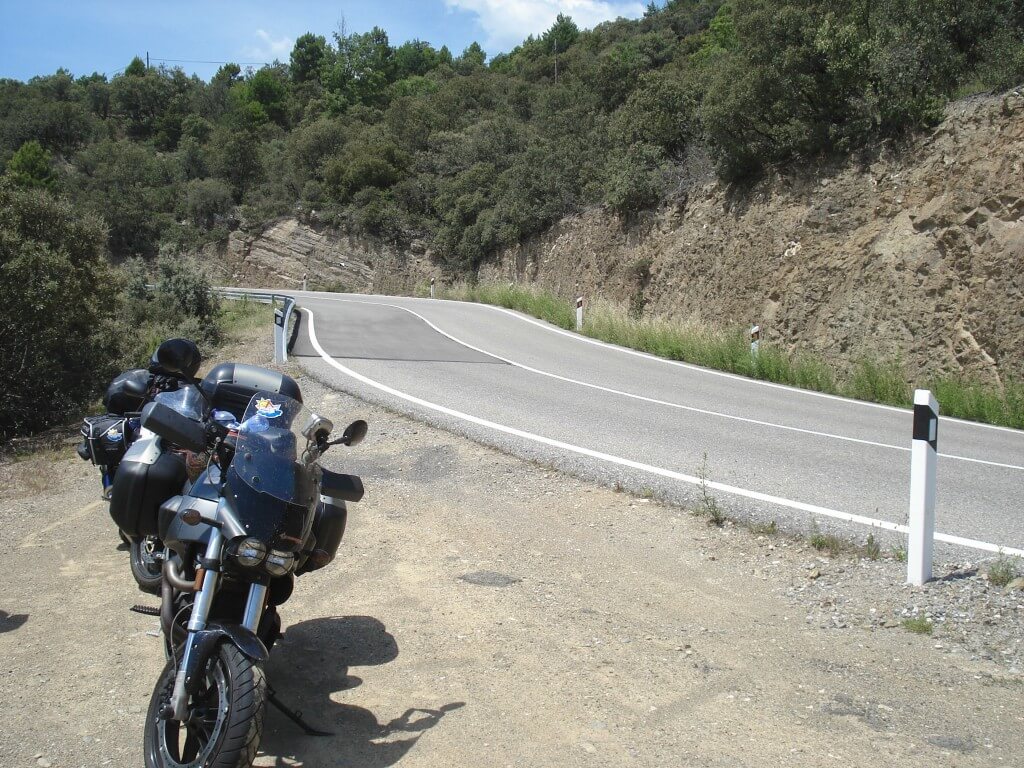 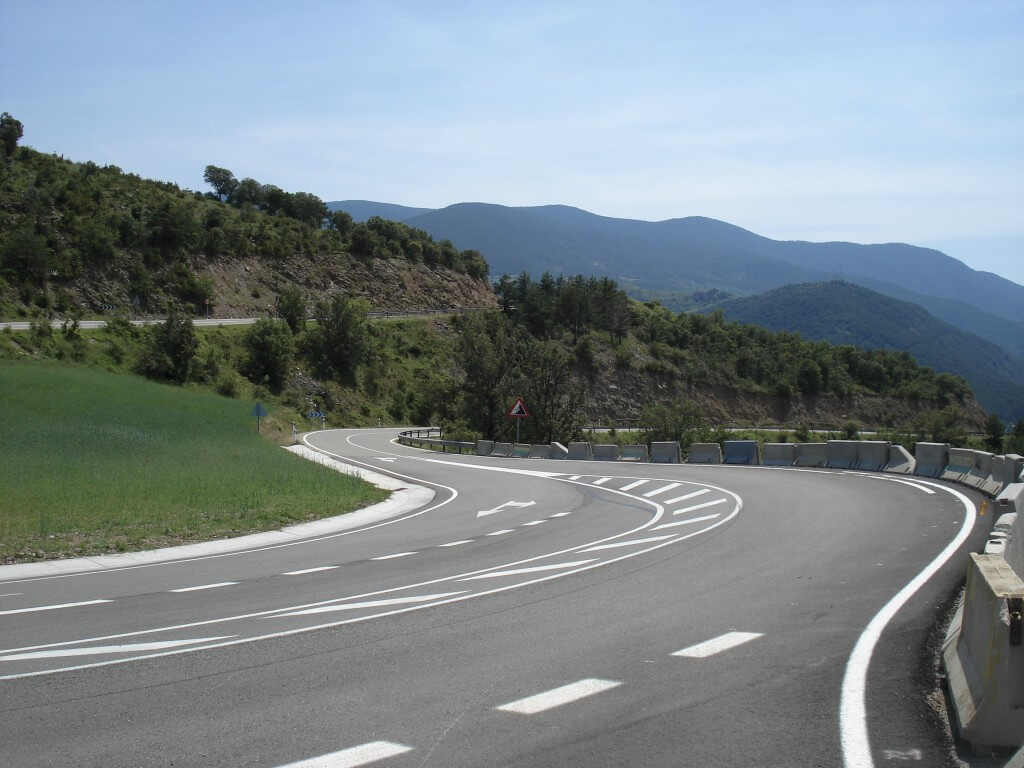 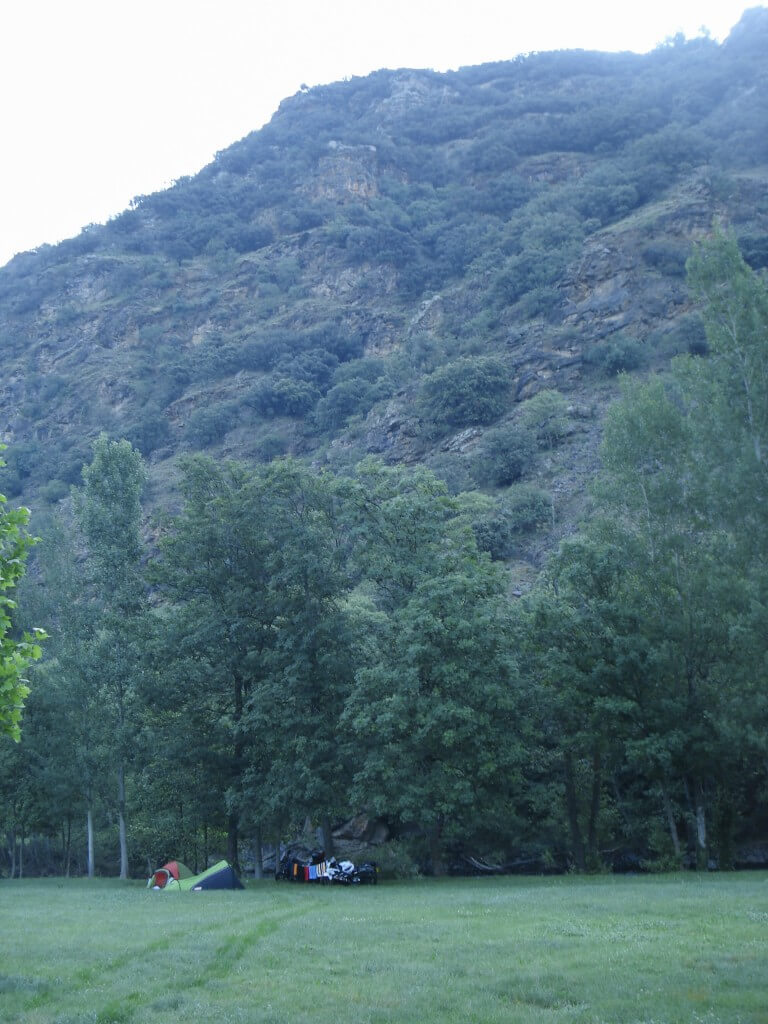 Had the campsite nearly all to ourselves.

Good job too cause we moved the tents to the opposite side the next day. We originally put the tents up there, next to the river not thinking about how noisy it was and also the sun would rise behind the mountain in the picture so we didn’t get any sun there till later on in the day and although the temperature was hitting 35’c during the day it was cold in the mornings and lots of condensation so everything would be soaked

Sort was a nice area and a good base, lots of nice road riding and trail riding around, unfortunately no trail riding on these bikes but would definitely go back with a more trail worthy bike 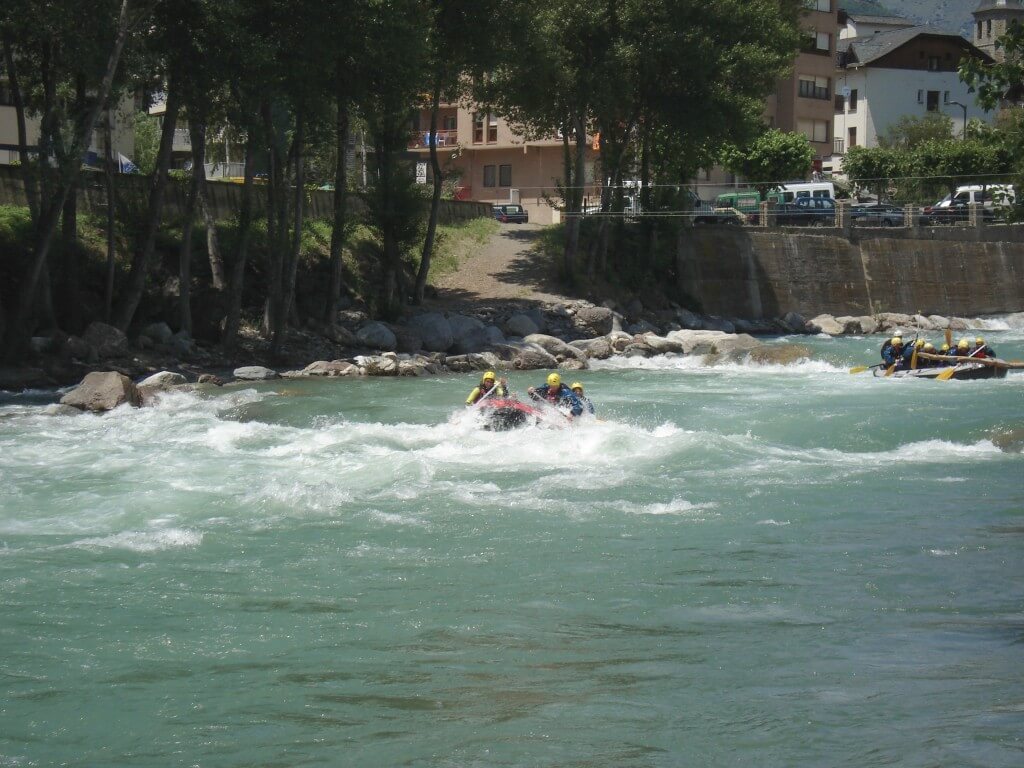 White water rafting, can imagine the noise of the river at night now

Back on the road again we spent the full day riding out of the mountains, destination Pau, France, to a hotel formule 1. Didn’t think it was going to take so long when looking at the distances online, but we didn’t take into account the speeds you have to ride when constantly riding through hairpins and stopping for pictures. 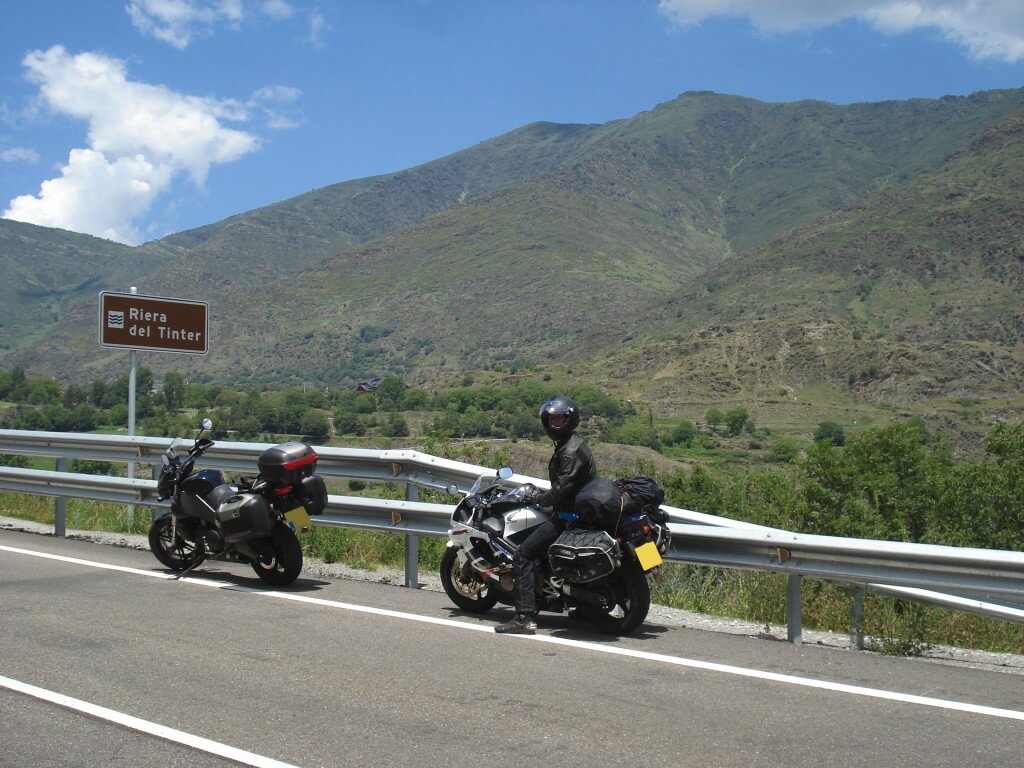 Hairpins climbing back out the mountains 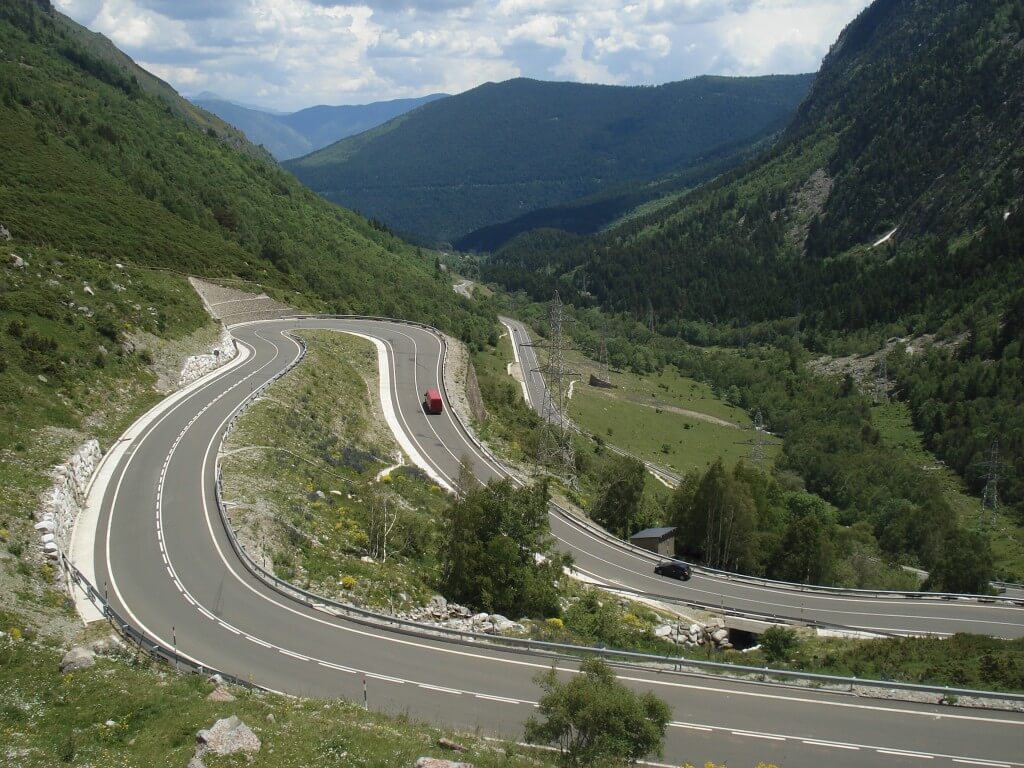 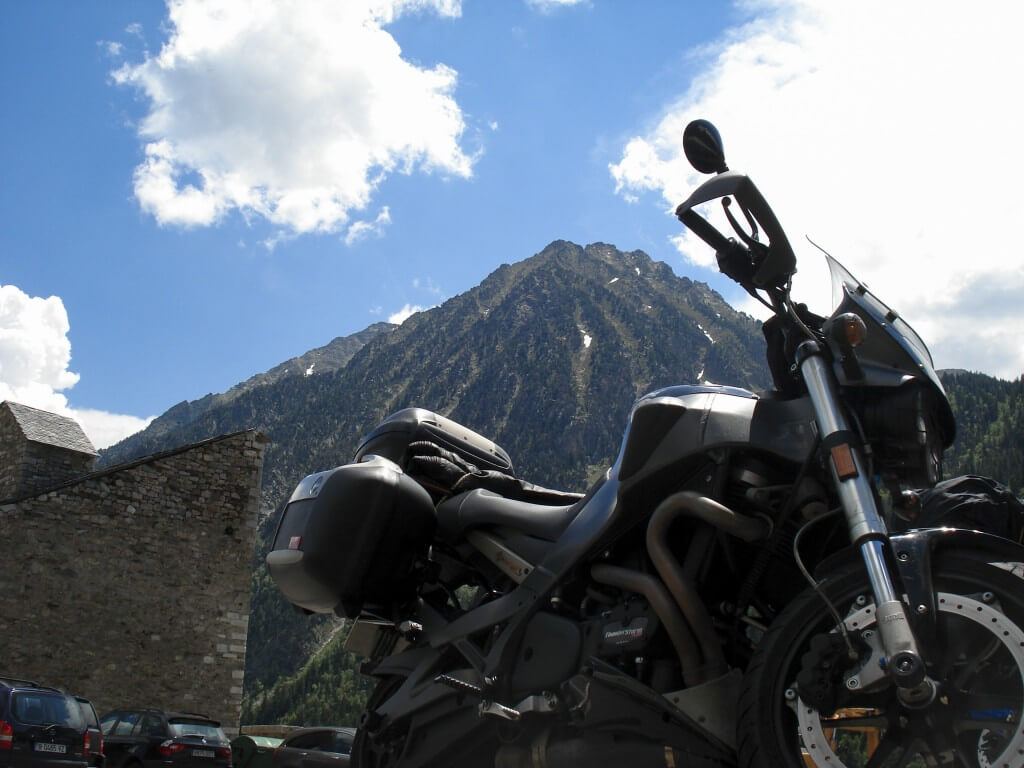 The higher we got up in the mountains the blue sky was starting to change to grey and big rain clouds were starting to gather. Eventually it started to spit a bit so we quickly pulled over and put our waterproofs on then the rain started coming down. The roads on the French side weren’t as good as the Spanish side with lots of loose gravel on the roads and in the rain making us have to ride even slower. 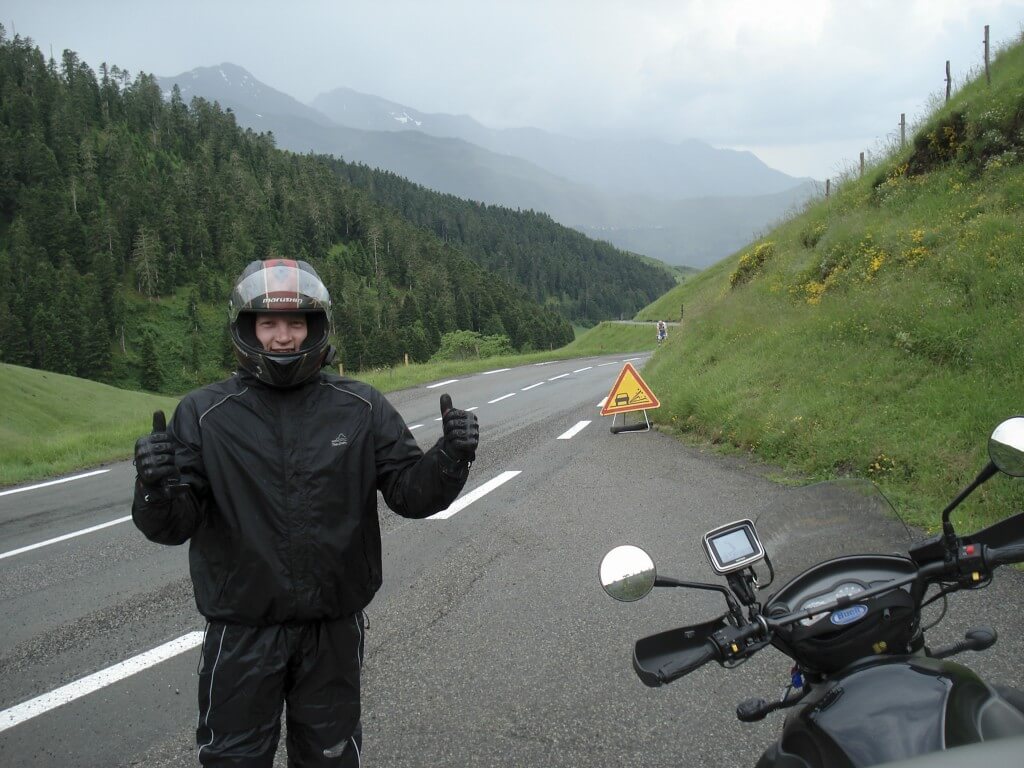 Rains coming, notice all the gravel too 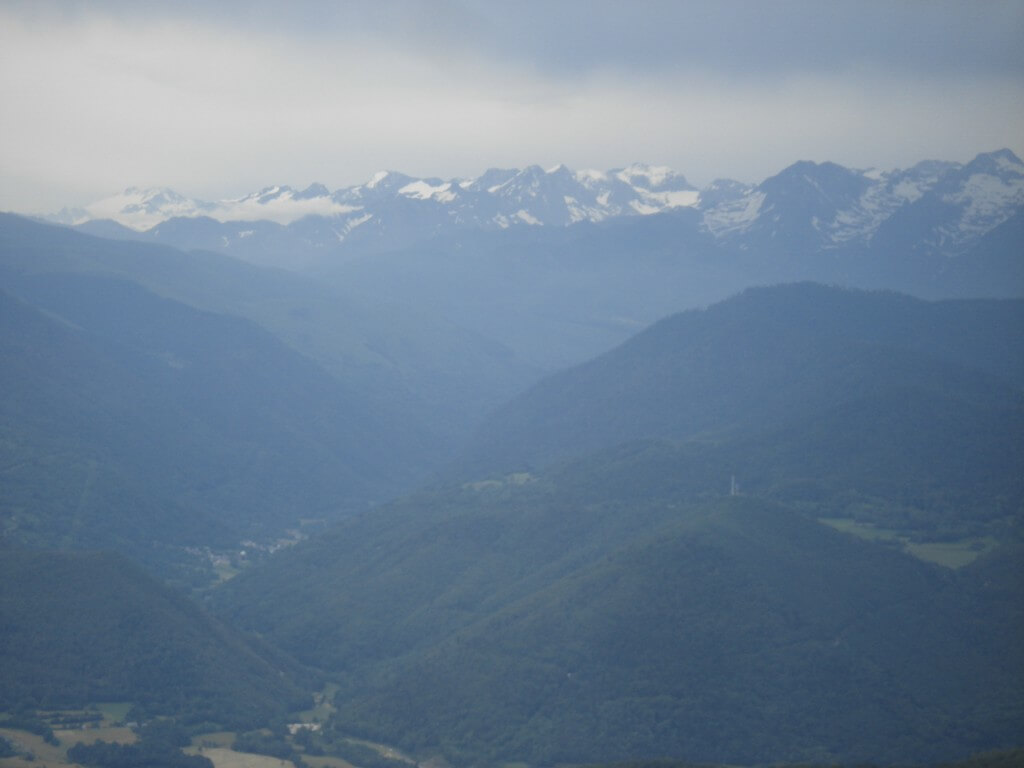 Only about 10 – 15 miles further along the road we were out of the bad weather, the sun was back out and we were now sweating in our waterproofs. Another quick stop at the side of the road to change again and we were back to having fun on dry roads.
It was starting to get a bit late and the satnav was still saying there was a few hours to go till we reached Pau if we stuck to the route I had planned using Tyre. We stopped for dinner at an Irish pub in a ski resort, that in the middle of June was like a ghost town and for some reason had a donkey walking around the road 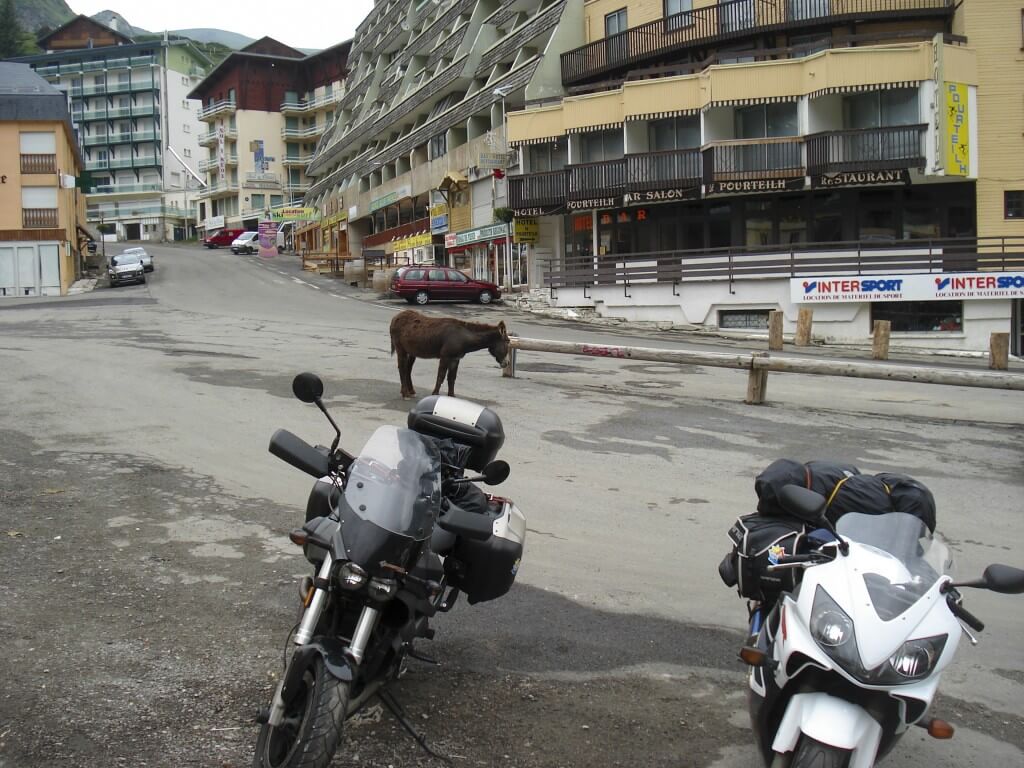 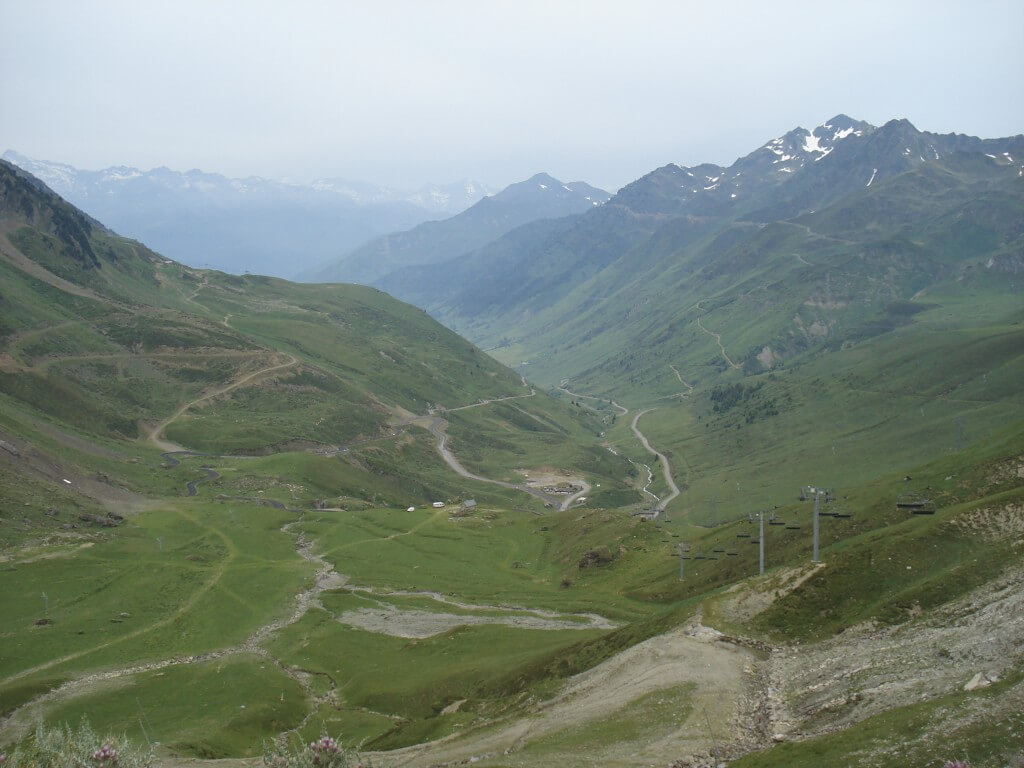 We changed the satnav to get us to the hotel the fastest way, it did save some time but not loads but at least we made it to the hotel while it was still light.
After a good nights sleep, the first time in a bed in 7 nights. We were looking for a way to Calais avoiding toll roads since we spent so much money on them in Spain. The routes the satnav were planning were taking ages and when it finally loaded a route up we saw why. Think it was going to take about 24 hours to get there that way. We decided to just pay the tolls to get it over with since we had to be up there that day to get the Euro tunnel back to the UK early the next morning. Leaving the hotel we got to our first toll booth after about 5 minutes and it only cost a couple of euros so we were happy and glad we didn’t try to avoid them. There were quite a lot of tolls going up France but since we were on bikes they weren’t that expensive and I think all together it was still less than the first one in Spain.

The ride up to Calais was the longest ride we had ever done in one day. The temperature was still in the 30’s and it was like having someone hold a heat gun in front of you for the whole journey up. The fan was constantly running on the bike and at every petrol stop we had we had to find some shade to lie in for a while and I would soak my t-shirt under a tap before setting off again and it would be dry in 5 minutes.
The days ride took over 15 hours and as was common on this trip we arrived at the Calais Formule 1 in the dark and unable to sit down anymore. The final days ride back home up the UK was torture and had to keep shifting about on the seat all the way.

Next time you have a long stint, try chamois butter/cream. I’m a cyclist as well it may not be a complete cure but it helps. I did an endurance ride called the deathride, 129 miles, 16K’, 5 passes and 13 hours out on the
bike. Butter good!

Didn’t know anything like that existed, i’ll try it next time 🙂

This site uses Akismet to reduce spam. Learn how your comment data is processed.