I’ve been riding bikes since 1996 and working on them properly since 2008.

After years of working in factories I finally had enough and quit, took some time off,  and went travelling for 7 months.  After getting back home and deciding what I wanted to do I went back to college and did a motorcycle maintenance course in 2007 then got taken on as a trainee with Harley Davidson.  Got the chance to work at Triumph in 2010 so made the move to there working as the head/only technician in the workshop.

I set up my youtube channel in 2012 when I got myself a GoPro camera to put my riding videos on.  I started making service videos too, which were more popular, and it wasn’t until someone asked if I could come and service their bike that I thought about working for myself full time.

After quitting work in November 2014, I took the winter off to get everything set up and started working for myself in February 2015.

I cover the whole of the UK, letting the work build up before hand then getting them all done in one big trip, usually working two weeks solid before heading back home to get everything ordered for the next trip.

I still like to get out on my trail bike, and plan to start doing enduro’s and get out on some bike adventures when I can plan work around them.

You can see my main Youtube page by clicking here 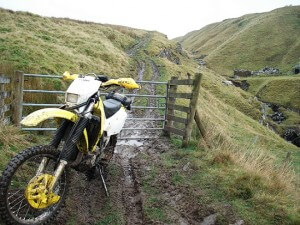 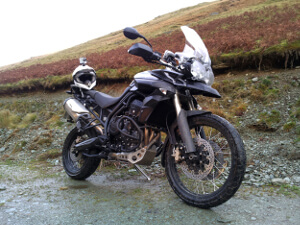 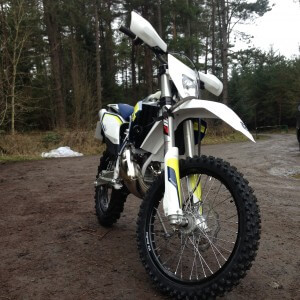 Whats your bike history? Let me know in the comments below….

The first bike I ever rode was my Dad’s Puch Maxi when I was about five years old!! He used it for work, but after ‘upgrading’ to a Honda C50 he gave me the Puch to mess around on. After he grew bored with the C50’s fierce acceleration, he bought a C70 and again gave me the old bike. His last two wheeled transport was a C90 which again was passed onto me after he’d finished with it. The first bike I bought was a Suzuki ZR 50 SL, which was a two stroke custom bike, somewhat embarrassing now, but at the time it was my pride and joy. As soon as I turned 17 I bought myself a Yamaha TZR 125, which sadly met an untimely end due to an errant Ford Cortina MKV. I had a break of some years before passing my test and buying a Honda CBR600, which I kept for 13 months and I did 16,000 miles on. Another Honda followed, this time a VTR 1000 ‘FireStorm’. After another break of several years I bought another FireStorm which I kept for eight years, before suffering a back injury at work and buying my current bike, a Triumph Tiger Explorer which is a fantastic bike.

I started riding about 1970 on a Honda CT70 Trail. From there I went to a Yamaha MX100 and started motocrossing in 1974 on a Honda CR125. In 1975 I bought a Yamaha TY175 and also starting riding trials. Luckily I got a sponsorship on a Suzuki RM 125 in ’75 as well and got to ride both trials and motocross which I kept up until the mid 80’s when I went back to college. In that timeframe I had another Suzuki RM 125, a Yamaha TY250, a Husqvarna XC 250, a couple of Montesa Cota’s, an SWM320 TL, a Yamaha IT175. I also got to race on a Yamaha YZ 465 and a Harley Davidson 250 MXer (1980 model)! My last bike before I took a 24 year hiatus from motorcycles was a Beta 240 trials. That 25 years was spent sport-wise racing bicycles and adventure racing. But, I wised back up and in 2011 I purchased my current bike, a 2012 Triumph Tiger 800 XC which I’ve ridden to Alaska from central Missouri on, in addition to riding to Asheville North Carolina. It’s a very good motorcycle and I do most of the maintenance to it.
I find the videos on this web site to be excellent!

Hi David,
Hank here from Branford CT. USA
Have been wrenching on my 2013 Tiger 800 Roadie since new. Love the bike and want to thank you for taking the time to video all the maintenance procedures for that bike. I know you’ve sold the Tiger but I take no offense 😉 You’re doing a great service, far better than any manual. Cheers and keep them coming.
Kind Regards,
Hank

Hi David – you’re on the wrong side of the pond (well…then again…maybe not) Anyway – we need you over here in Wa State. Nearest triumph dealer is now 80 mi away – requires 2 – 160 mi round trips or an overnight to service the thing. Thanks for the tutorials – at least now i can do some of the simple maintenance with minimal adult supervision. Best, John, Olympia Wa

I got to this page looking for a motorcycle mechanic, but actually see no contact information to get hold of you

It’s on the bottom of the service pricing page

Hi, I’ve just been looking at service costs for tiger 800 (2016) . I have noticed your service sheet is a issue 14/2014 and there are now a couple of changes in the 2016 models sheets issued by Triumph. Do you use the latest service recomdations or is just an oversight on the website. Thank you

I’m in epsom surrey. ive brought a new triumph tiger sport 1050 which wont need servicing till the summer but i have a 2002 very low milage fjr1300 in my garage thats been off the road a long time !! about two years ago in turned over no prob but the battery ran out & when i replaces it it fired up as normal but after a couple of weeks it wouldnt !! rather like imobilised !! no clock needles going round !! need to get it running serviced & mot to sell !! im open to any dates you have over the next few months & not really worried about costs as it needs to go !! look forward to hearing from u !!

I only work on triumphs

Brilliant, wish I had used David before!! Just serviced my Tiger sport today, arrived bang on the time he said, & got on with the job, no fuss, efficient incredibly tidy & a credit to his workmanship. First class & will certainly use again & highly recommend to others. Thank you David & oh, of course Vincent too!!

What can I say….David is simply a top man. He turned up on time as promised. He is a polite likable fella. It was easy to talk to him and ask questions about the servicing. He is meticulous in the way he laid everything out and worked on my bike. He was kind enough to talk me through the service procedure. It was fascinating standing there watching him work on the bike. I am absolutely happy with the job he has completed and will thoroughly recommend him. He will be the go to guy for motorcycle service from now on.

David…Thanks a million. I took the bike for a spin and I couldn’t stop grinning. She performed brilliantly. All the best. Have a wonderful Christmas.

Thanks for my 1200 mile service today bike feels like new,nice to meet you and Vincent see you next year hopefully

This site uses Akismet to reduce spam. Learn how your comment data is processed.